In the most recent Zoom roundtable sponsored by The Collegian Alumni Interest Group (AIG), three experts on digital media and publishing talked about their careers and how their experiences at Penn State, particularly at The Daily Collegian, aided them.

Leen Obeidat, director of Business Development at flytedesk, a technology firm that bridges the gap between national advertisers and college media, told The Collegian students, “My experience at The Collegian led me to my career path. I was a finance major. I thought I would work for a bank. Then I joined The Collegian.” She served in various positions at the paper, and ultimately was Business Manager in 2017.

Davis Yoshitani, an advertising and public relations major and Vice President of The Collegian Business Division, moderated the panel, asking the three experts how their time at The Collegian and Penn State led to their current positions and what skills they cultivated in college that have stood the test of time throughout their careers.

In addition to Leen, on the panel of experts were Jordan Hyman, SVP, head of East Coast Sales, at Nativo, the world’s leading native advertising and storytelling platform, and Evan Spector, Director, Stractivation at Publicis N2 and responsible for the Novartis account.

Jordan, the immediate past president of The Collegian AIG Board, was a journalism major at Penn State and had no interest in working in advertising at that time. “There was a wall separating news from the business side,” at that time, he said, “and we would poke fun at people on the other side.” He was employed as a journalist for a year after graduating but then began work in branded content for Sports Illustrated.

He said the story telling skills he developed at The Collegian have proved valuable throughout his career. He said in advertising, he helps brands tell their story.

Like Leen, Evan said that initially when he was in college, he thought he would be an investment banker. But then, two college courses in communications set him off on a media and advertising career, which was close to home because his father, sister, cousin and niece all work in advertising.

He told The Collegian students that learning to ask the right questions, and a lot of questions, is important. He said he must find out what the goal of the advertiser is and whether the project will fit a specific need. To get that kind of information, he said, it’s important to listen, not just hear. Listening is absorbing and understanding what people are talking about, he said.

Leen said working on The Collegian gave her skills, particularly in negotiation, that are useful to her today. Also, she said she learned to talk to people she didn’t know and get them to do what she wanted them to do.  She said becoming comfortable talking to strangers helped her in situations like career fairs and still helps her today in dealing with new clients. 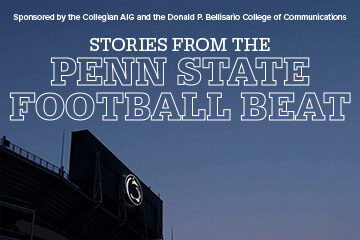